Constantin Hertoiu was born in the village of Caineni, district of Valcea, Romania on 28 February 1914. His family fled from the Austrian-Hungarian war and his birthplace is unknown. 2 years old, he get typhus. One day, an austrian or hungarian soldier came in by force and throw a massif metal pipes with gunpowder in his temporary fireplace and he took fire. The scars are visible even today.

He joined the military 1936. 1941, they received orders to attack Prut. But the russians was ready and attacked back. Constantin was far back in the convoy and could fled.

1943, after the siege of Stalingrad (today Volgograd), he was captured by the russians. They took him to Siberia where he worked in a coal mine for five years. He worked eight hours per day without pay with too little food. This time, he learned to speak russian.

1948, he came to Caineni in Romania with train. He get married 1950 with Loana and had six children: three daughters and three sons (one daughter deceased as of November 2020) The other five is still alive. Loana died around 2004.

In September 2020, he was among those decorated with Royal Medal for Loyalty by Margareta, Custodian of the Crown of Romania, making him the oldest person ever who has received a Romanian royal distinction. 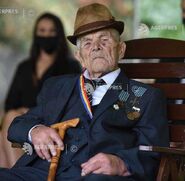 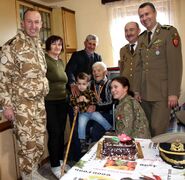