She started working in a factory as a seamstress at a young age. She would later study at a textile institute in Norrköping.

She married the trader Ragnar Norling (1909–1958) in 1942. The marriage became unhappy, but Ragnar refused to divorce, so Dagny escaped. When they at last divorced in 1951, she married the manufacturer Harry Carlsson (1913–2004). They travalled a lot around Europe. They were married until Harry died in cancer 2004. She have no children.

At the age of 99, she went to a class to learn more about computing, later starting her blog from what she learned. At the age of 100, she became known in media for her blogging at such a high age.

When asked about what makes a long life, she answered good genes and curiosity.

She has participated in several TV-shows such as TV4:s Nyhetsmorgon, SVT:s Fråga doktorn, Gomorron Sverige and the SVT documentary series Det är inte så dumt att bli gammal. She has also been a guest in the Nordic talk show Skavlan on 4 March 2016. as well as TV4's Bingolotto game show. In 2016, Dagny Carlsson had a small role in the film "Hundraettåringen som smet från notan och försvann", in which she played an elderly woman who had moved into the character Allan's old room at the retirement home.

On 23 February 2021 at the age of 108, she received her first dose of a COVID-19 vaccine, making her one of the oldest people to have received the vaccine.

Carlsson died in Solna, Stockholm County, Sweden, on the night between 23 and 24 March 2022 at the age of 109 years, 319/320 days. At the time of her death, she was the fourth-oldest known living person in Sweden, behind Flarid Lagerlund, Gunborg Hancock, and Agnes Bostrom. Carlsson, narrowly missed out entering the top 3 oldest living people in Sweden as Flarid, who was exactly 27 months older, died on 9 April 2022. 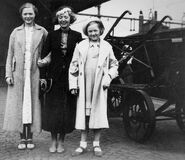 Carlsson (middle) with her sisters in mid-1930s

Carlsson (right) with her siblings in late 1930s 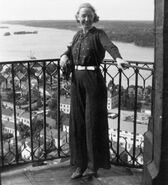 Carlsson on a trip to Stockholm in 1938 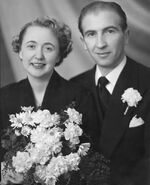 Carlsson on marriage day in 1951

Carlsson using the computer at the age of 104 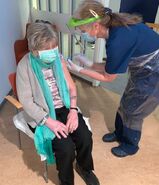