Demetrius Philipovitch (Serbian: Dimitrije Filipović; 8 March 1818? – fl. October 1932) claimed to have been the first Yugoslavian supercentenarian on record. He is considered a "grandfathered" case - if investigated today, he would not be validated, but his claimed age was validated by Guinness World Records. He was born and died in present-day Serbia.

In July 1928, Demetrius and his wife received media attention for being the claimed longest married couple in Kingdom of Yugoslavia and possibly in the whole world. Demetrius claimed that he was more than 20 years old when Milos Obrenovic, Prince of Serbia, abdicated in 1839. According to him, his wife Zivana was 3 years younger than him.

Philipovitch was last reported at the claimed age of 114 (he claimed 117), in October 1932, when he and his wife claimed to be celebrating their 93rd anniversary of marriage. His wife, Zivana (Serbian: Živana) claimed to be 115 at that time. They lived in the village of Vrbica, near to Arandjelovac, Serbia (then Kingdom of Yugoslavia). Allegedly, they were married in 1839 in a small village near Zemun. Demetrius never smoked but sometimes drinked a good glass of wine. His exact date of death is unknown - he was last known to be alive in October 1932. 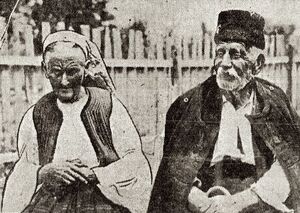