Dimosthenis Theocharidis [Greek: Δημοσθένης Θεοχαρίδης] (10 July 1914 – 20 February 2019) was a Greek politician and lawyer. He served as a member of parliament for Florina with various parties for many terms. He was elected for a total of 8 parliamentary terms, equaling the record of terms of Georgios Andreadis. At the time of his death, he was the oldest living New Democracy politician.

Post-government he was a candidate for MP in Florina in 1974 with the Union of the Center-New Forces receiving 4,464 votes. In 1977 he was politicized again in Florina with EDIK, without success. He was re-elected MP with New Democracy in 1981 with 7,007 votes and in 1985. He was also, as a personal choice of Karamanlis, General Secretary of Northern Greece. 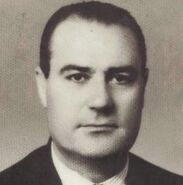 Photo from 8 February 1990. From left to right; General Secretary of the Ministry of Agriculture, deceased Demosthenes Theocharidis, the Mayor Costas Mavromatis, the Minister Stavros Dimas and the Deputy Mayor Kosmas Pougaridis