Dominga Coca Garcia (Spanish: García; born 14 September 1908) is a Chilean supercentenarian whose age is currently unvalidated. She is the oldest (known) living person in Chile.

Coca Garcia was born in a salpeter work called "Agua Santa" in the region of Tarapaca, in Chile, on 14 September 1908, as the firth child of 14 siblings (from which she's the only one who's still living). She is from Aymara ethnicity. Her youngest sibling died in 2017 at the age of 100. Her maternal grandfather, Ignacio Garcia, died in the War of the Pacific.

At age 12, she moved to Santiago, and she started working as a laundress. Apparently, she used to do the laundry of very important people of Santiago, such as Enrique Balmaceda. She had at least one daughter, Paulina, who died around 1993. 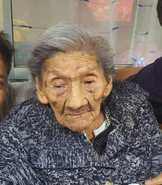