Dominga “Dominguita” Velasco (née Loera; 12 May 1901 – 11 October 2015) was a validated Mexican-American supercentenarian, who is currently the oldest recorded person ever born in Mexico, after having surpassed the record of 114-year-old Soledad Mexia on 30 May 2015. She moved to Oakland in 1922 and lived there until her death. She was a community activist, dancer, and restaurant owner. She died on 11 October 2015 at the age of 114 years, 152 days. She was the world's 7th-oldest living person, and the second-oldest in the United States.

Velasco was born in Yahualica de González Gallo, Jalisco, Mexico, on 12 May 1901. She grew up in Coahuila. Her father was a shoemaker. She was the youngest of five children. She and her family moved to the USA in the 1920s. They had fled civil unrest at the end of the Mexican Revolution, witnessing the last battle between followers of Pancho Villa and the government Federales in Ciudad Juárez as they crossed the border. They spent three years in El Paso and they later moved to California and settled in the Fruitvale neighborhood of Oakland.

She first worked at the California Fruit Packing Company but that was only seasonal work so she then moved to the California Candy Company commuting from San Francisco to Oakland. In 1928, she married Salvador Velasco Ruiz and they had two children, Josephine and Rosemarie.

Velasco quit working due to pain, but during World War II Velasco and her husband instead opened a restaurant in Oakland, called Chapala (after Lake Chapala). They sold the business after three years and opened another restaurant, The Enchilada Shop, which they sold after another year and started a floral shop. Two years later, they sold the shop, retired. However, restless, Velasco began working in the Spanish community and helped found the Unity Council. The group would work to secure better living facilities for senior living in Oakland and would eventually own their own senior living facility.

She was the subject of a 2004 news profile in the Oakland Tribune which reported that, at age 102, "Velasco is now considered to be a great-grandmother of Latino activism in Oakland." She was honored as one of the female pioneers of Oakland with a plaque as part of the Sigame statue in Oakland. along with a plaque in front of Oakland City Hall.

When asked about her key to aging well, she said, "Be happy". Velasco's residence as of 2014 was Posada de Colores in Oakland.

Velasco died on the morning of Sunday, 11 October 2015 at her home in Las Posada de Colores, Fruitvale district of Oakland, California at the age of 114 years, 152 days. At the time of her death, she was the oldest resident of California, the oldest person born in Mexico, and the 7th oldest person in the world. Following her death, a memorial mass was held at St. Anthony's Church. 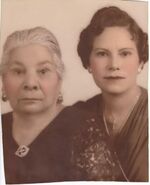