Edna Ruth Parker[1] (née Scott; 20 April 1893 – 26 November 2008) was a validated American supercentenarian and, until her death, was recognized as the oldest living person in the world following the death of Yone Minagawa of Japan on 13 August 2007.[2] She assumed the title at age 114 years, 115 days. Parker became Indiana's oldest living person on 7 April 2005 at age 111 years, 352 days (following the death of then almost-112-year-old Minnie Kearby, who was just six days older at the time) and the state's all-time recordholder on 19 January 2007 (aged 113 years, 274 days), surpassing Mary Parr. She became the oldest living American on 14 February 2007 (aged 113 years, 300 days), following the death of fellow 113-year-old Corinne Dixon Taylor of Washington, D.C.[3] At the time of her death, Parker was listed as one of the 15 longest-lived people ever.

Parker was born on a farm in Shelby County, Indiana, near Bengal in Hendricks township and raised eating a typical farm diet of meat and starch. She attended Franklin High School, then took classes at Franklin College to obtain a teaching certificate. Parker taught at a two-room schoolhouse in Smithland, Indiana, for 2 years, until she married her next door neighbor, Earl Parker, on 12 April 1913.[4] Earl died on February 23, 1939. They had two sons, Clifford and Earl Jr.[5], both of whom she outlived.[6] As of April 2008, she had five grandchildren, 14 great-grandchildren and 13 great-great-grandchildren. Her two sisters also are deceased; Georgia lived to be 99, while her sister Opal was 88 when she died.

Parker lived alone on a farm on Blueridge Road after her husband had died when she was 45. She remained there until age 100, when, still in very strong health, she moved in with one of her sons. One winter night, she was left alone while her son and his wife went to a basketball game. When they returned, she was in the back yard, unconscious, in the snow, and visible in the poor light only because she was wearing her favorite red sweater. Her family feared her death, but medics arrived and she made a full recovery except for only mild injuries. Afterwards it was decided that she needed to move to a nursing home.

Until her death, Parker lived at Heritage House Convalescent Center, a retirement community in Shelbyville, Indiana. In April 2007, at the age of 114, she met with the second-oldest Indiana inhabitant and then-fifth-oldest living person in the world, Bertha Fry. Fry, who lived in Muncie, Indiana, was 113 at the time, which set the highest combined age for a meeting of two supercentenarians, at 227 years and 142 days. Parker lived in the same home as Sandy Allen, the tallest living woman verified by Guinness World Records, until Allen's death on 13 August 2008. Parker enjoyed reading and reciting poetry, especially the works of James Whitcomb Riley, and according to family liked to quote his poetry to visitors. She read the newspaper every day, enjoyed cards from well-wishers, and often sent autographs to people asking for them. In 2007, she received a letter from President George W. Bush on her 114th birthday, who thanked her for "sharing her wisdom and experiences" with younger generations. Also at that time, she was given the key to the city of Shelbyville from the Mayor, and was visited by the state Governor and Senator.

The Heritage House Convalescent Center planned two separate birthday parties to celebrate her 115th birthday. At each one, they released 115 multicolored balloons, because she enjoyed watching balloons float into the sky. The public celebration was on 18 April 2008, while the private family one was on 20 April 2008, her actual birthday. She was one of only 21 people validated to have reached 115 years of age at the time.

On 20 May 2008, one of four peregrine falcon chicks nesting atop of a downtown Indianapolis high rise was named after Edna. A live nest cam of this bird and family is available on the Indy Star Falcon Blog.[7] A video clip of the naming announcement during banding day is available on YouTube.

She was buried in Shelbyville's Miller Cemetery. 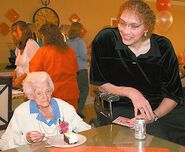 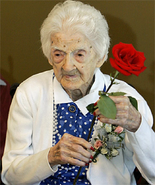