Elfriede Martha Petrasch (14 February 1905 – 2015) was a Polish-German supercentenarian whose age is currently unvalidated by the Gerontology Research Group (GRG). At the time of her death, she was the oldest known living person in Berlin.

She worked as a shop assistant.

Elfriede Petrasch died sometime between February and October 2015 in Berlin, Germany, at the age of 110. 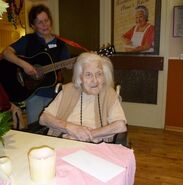