Ella Gertrude Ellison (née Parrott; 16 May 1908 – 25 March 2020), also known as Gertrude Ellison, was an American supercentenarian whose age is currently unvalidated by the Gerontology Research Group.

Ellison was born in Anoka, Minnesota, USA on 16 May 1908. She was one of nine children born to Richard and Henrietta (Searl) Parrott. She grew up in Pollock, South Dakota, where she sewed buttons on World War I hospital gowns by hand when she was ten years old.

Ellison graduated from Pollock High School in 1926, and then graduated from college in Ellendale, North Dakota in 1928. She worked as a teacher in rural schools in North and South Dakota for nine years.

Ellison moved to Washington state in 1937, following her sister who had already migrated to the city of Puyallup. Ellison worked as a teacher for much of her life. She married Roy Ellison in Kitsap County, Washington, USA on 10 July 1939. Her husband Roy died in 1965. They had three sons: Wilton, Russell, and Burton. After raising her family, Ellison earned a Bachelor of Arts degree from Pacific Lutheran University and taught for 14 years in the Sumner Washington School District.

In her later life, Ellison lived in a retirement home in Puyallup, Washington, where she beame a supercentenarian in May 2018. She died on 25 March 2020 at the age of 111 years, 314 days. At the time of her death, she had eight grandchildren and 15 great-grandchildren.

Ellison as a young woman 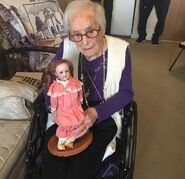