Ellen Goodwill (née Lear; 2 February 1907 – 2 March 2021) was an American supercentenarian who was the oldest known person living in Michigan at the time of her death. Her age is validated by the Gerontology Research Group (GRG).

Ellen Goodwill was born in Paris, Kentucky, on 2 February 1907. As a young adult, she moved to Columbus, Ohio, and became a model. In 1947, she married Augustus “Gus” Goodwill in Battle Creek, Michigan, after meeting him at a dance several years prior. The couple had no children. Gus died in 1972, after 25 years of marriage.

Goodwill worked dressing shop windows in Battle Creek until her arthritis prevented her from doing so. She celebrated her 110th birthday in 2017 with her neighbours, friends, and family. At the time of her 111th birthday in 2018, she still enjoyed reading magazines and doing crafts in her nursing home. She became the oldest known living person in Michigan following the death of Irene Dutton on 15 May 2020. Goodwill died in Battle Creek, Michigan on 2 March 2021 at the age of 114 years, 28 days. She is buried in Fort Custer National Cemetery. Following Goodwill’s death, Irene Dunham became the oldest living person in Michigan.

Goodwill as a young woman 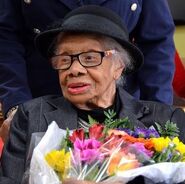 Goodwill on her 114th birthday in February 2021