Elvira Josefa Paredes de Samaniego (19 October 1908 – 10 July 2020) was a Panamanian supercentenarian whose age is currently unvalidated by the Gerontology Research Group (GRG). At the time of death, she was the oldest (known) living person from Panama.

Paredes was born in David, Chiriqui, Panama, on 19 October 1908. She married Don Samaniego. They had nine children. In October 2018, she celebrated her 110th birthday. In August 2019, she had 26 grandchildren, 38 great-grandchildren, and 89 great-great-grandchildren. On 11 January 2020, Paredes became the oldest known living person in Panama, following the death of Clara Cedeno Tello. 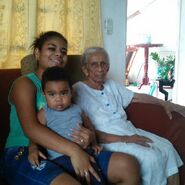