He officially became the oldest validated living person on 11 December 2006, following the death of African-American Elizabeth Bolden, who was 116. He was the 36th person to hold this title since its inception. Unusually, he was one of the few males to hold this title: the 16 consecutive preceding holders were all female, and 39 of the top 40 oldest persons living at the time of his death were as well. Mercado was four years older than the next recognised oldest living man, Tomoji Tanabe. The last male to have held the title of WOP was Yukichi Chuganji in 2002. Chuganji was the first male since 2000 to be WOP. Del Toro was the 2nd, and the 3rd was Jiroemon Kimura in 2012.

Del Toro is the oldest validated person ever in the history of Puerto Rico. On 21 May 2006, he reached the age of 114 years, 273 days, surpassing the previous recordholder, Ramona Trinidad Iglesias-Jordan, who also made it to the world's oldest living person status.

When he died at the age of 115 years, 156 days, Mercado was the second-oldest fully validated male ever, 96 days behind Christian Mortensen, and the 15th oldest person ever. He achieved the runner-up position on 31 March 2006, when he surpassed the longevity mark of 114 years and 222 days set by Mathew Beard of the USA, who lived from 1870 to 1985. Mercado is currently the 3rd oldest validated man ever, and the 39th oldest validated human ever.

He was buried at the Municipal Cemetery of his native town of Cabo Rojo, with mayors, legislators and Puerto Rican "vedette" Iris Chacón in attendance.

Emiliano (sometimes 'Emilio') was born the son of Delfin Mercado and Gumercinda del Toro. Emiliano worked in the cane fields until the age of 81. He never married and never had children, but said he had three "girlfriends" (love interests) in his life.

Mercado first came to the attention of longevity researchers in 2001, when a story ran about a 110-year-old veteran in a parade in Puerto Rico. After that, researchers tried to track him down, but only after the November 2004 death of Fred H. Hale, Sr. did someone finally start sending in documents. Following Fred's passing Emiliano apparently became the oldest man in the world, with documents supplied so far including a birth certificate, baptismal certificate, 1910 census record and veteran ID card. By January 2005 Guinness had accepted Emiliano as the "oldest living man whose age could be fully authenticated."

In addition, as a veteran of World War I, he broke the record for longest-lived veteran of any military force that was set by Mathew Beard, albeit as a non-combat veteran (Mercado was still in training camp when the 11 November 1918 armistice was declared).

In 1993 he was honored by U.S. President Bill Clinton with the medal commemorating the 75th anniversary of the signing of the truce that ended World War I. Mercado del Toro, the elder of two siblings, had to move from his familiar Cabo Rojo grounds due to a fall he had in his home when he was 102, which affected his hipbone. His 85 year-old niece took him to live with his relatives, and he was well taken care of by nieces and nephews - and their families, who called him "Tío Millo" ("Uncle Millo") - at their home in Isabela.

Mercado could reminisce about being a child when U.S. troops invaded Puerto Rico in 1898, and he clearly remembered the fighting that marked the end of Spain's colonial empire in the Americas.

He credited his longevity to funche, a boiled corn, codfish and milk cream-like dish which he ate every day as a habit. Mercado also claimed that his sense of humor was probably responsible for his long life, and he would tell jokes and humorous anecdotes almost to the end of his days. He would not elaborate on details of his love life, but would humorously hint about them: in one of the many interviews he gave to Puerto Rican media, Mercado claimed to be at the "dancing club" (euphemism for a bordello) owned by Isabel Luberza Oppenheimer (better known as "Isabel La Negra") the day she was assassinated. He was 83 years old at the time, and claimed to have hid under a table when Oppenheimer's killers started firing shots at the place. Asked what he was doing there, he said: "praying... or at least I was when the bullets started flying!"

His last two birthdays were media events in the town of Isabela. Civic leaders and veterans commended Mercado on his endurance and lucid mind, but the "gift" he would enjoy the most was the visit of Puerto Rican vedette and media icon Iris Chacón. In an interview, Mercado claimed to be a great fan of the artist, and particularly of her derriere ("That rump was something serious!", he was quoted as saying). Chacón visited Mercado, who could barely see or hear at the time, on his 114th birthday in 2005, and he was extremely pleased with her visit. His photo touching Chacón's rear end, with a big smile on his face, made newspaper headlines in Puerto Rico. She returned the following year to greet him. After hearing news of Mercado's death, Chacón was quoted as saying: "I feel like I've lost my own grandfather. I was blessed for knowing him, knowing that I made him happy, and blessed for the anecdotes and wishes he told me the times I met him. His wisdom is something I learned a lot from. His life is an example of how you're supposed to live your life, happily and doing good, for it will give you longevity and goodwill from everyone." 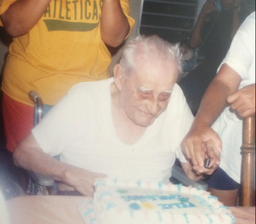 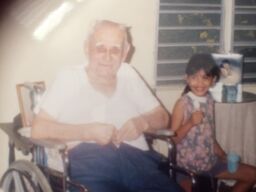 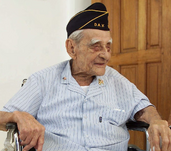 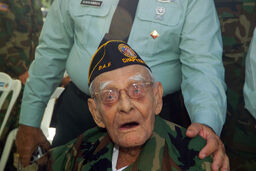 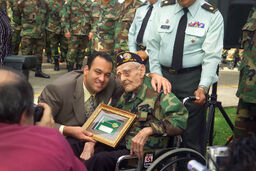 Aged 113, receiving the symbolic Keys of the City of Edgar Santana Rivera, Mayor of Vega Baja on 22 January 2005 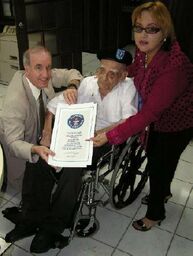 Aged 113, with his great-niece Dolores taken on 28 January 2005 at a reception immediately following the Guinness Certificate presentation to him in at the town plaza in Isabela, Puerto Rico 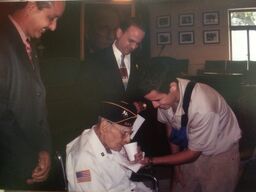 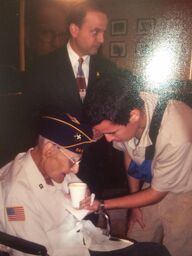 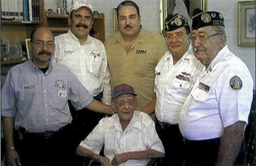 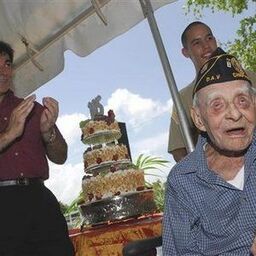 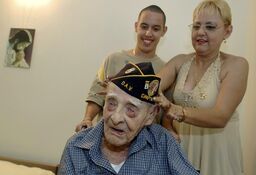