Emma Martina Luigia Morano-Martinuzzi (29 November 1899 – 15 April 2017) was an Italian supercentenarian, believed to have been the oldest validated living person in the world following the death of American Susannah Mushatt Jones on 12 May 2016 until her own death on 15 April 2017. She was the last known surviving validated person born in the 1800s, and one of the last three born in the 19th Century. She was the oldest living person in Italy and Europe since the death of Maria Redaelli on 2 April 2013. She also holds the title of the oldest validated Italian person ever. She is currently the eighth-oldest validated person ever. Morano celebrated her 117th birthday on 29 November 2016. She is one of only three validated European supercentenarians to reach the age of 117, with the other two being Jeanne Calment and Lucile Randon of France.

Emma Martina Luigia Morano was the eldest of the eight (five daughters and three sons) children born to Giovanni Morano and Matilde Bresciani on 29 November 1899 in Civiasco in the Province of Vercelli in Italy. When she was a child, she moved from the Sesia Valley to Ossola for her father's job, but the climate was unhealthy there, so a physician advised her family to live somewhere with a milder climate, so the family moved to Pallanza, on Lake Maggiore, where Morano lived until her death. Her mother, aunt, and some of her siblings reached the age of 90, and her sister Angela Morano (1908–2011) died at the age of 102. Angela and Emma were the oldest known living siblings in Italy until Angela died.

She married Giovanni Martinuzzi (1901–1978) in 1926, when she was 27 and he was 25. They had a son in 1937, but unfortunately, he died 6 months after birth. The marriage wasn't happy (as Giovanni reportedly engaged in spousal abuse), and in 1938 she drove her husband out of the house and they separated, but were formally married until his death. She said she never took drugs, ate three eggs a day, and drank a glass of homemade brandy. Emma Morano worked in a jute factory until 1954 and then worked as a cook in a kitchen at a boarding school until retiring in 1974 at the age of 74.

Morano died in Verbania, Verbano-Cusio-Ossola, Italy on 15 April 2017 at the age of 117 years, 137 days. Following her death, Violet Brown succeeded her as the world’s oldest validated living person.

Morano as an infant 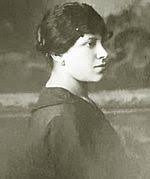 Morano in her 40s while visiting the center plaza of Verbania, Italy 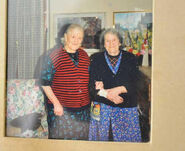 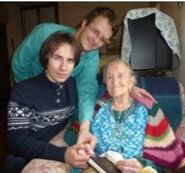 Morano (aged 117) a few weeks before she died, with Agustin Reiter 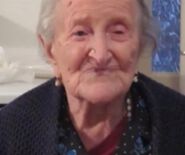