Emma, an African American, was born as Emmaline Fanchon May Faust in Gibsonville, North Carolina, to former slaves on the Faust Plantation. Alphonso, Emma's father, was the son of former slaves Cain and Letha Faust. Emma's mother, Martha Gibson Faust, who was of native American heritage, was also born into slavery.

The family moved to Connecticut in 1900. Tillman ran her own baking and catering service whose regular customers included Dr. Thomas Hepburn, a noted Hartford Hospital urologist and father to actress Katharine Hepburn.

By 16 February 2006, the passings of several older people (including Gladys Swetland, Bettie Wilson and Susie Gibson) had moved Emma up to second-oldest in the 50 U.S. states, and she became the oldest following the December 2006 death of the then world's oldest person, 116-year-old Elizabeth Bolden. By then she was also among the 60 longest living people ever. On 18 January 2007, she became the oldest living woman following the death of 115-year-old Canadian Julie Winnefred Bertrand, and on 24 January 2007 the world's oldest living person with the death of Puerto Rican Emiliano Mercado del Toro, who was also 115.

Tillman resided at an assisted living center in East Hartford, Connecticut. Her death at age 114 years, 67 days around 10:10PM EST means that her title reign of just four days was the shortest ever, breaking the previous record of shortest tenure, 15 days, held by Florence Knapp of the USA. Her successor was Yone Minagawa, of Japan. Tillman is buried at Spring Grove Cemetery in Hartford. She lived during almost half of all the US presidencies, from Benjamin Harrison to George W. Bush, the 23rd to the 43rd. 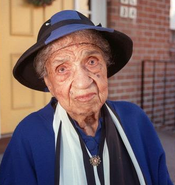 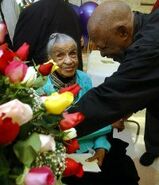 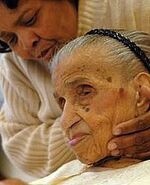 Tillman at the age of 114 with great-granddaughter Carol Stewart. 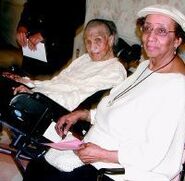 Tillman with her daughter Marjorie (undadated).