Erna Zahn (née Miller; born 14 April 1908) is an American supercentenarian whose age is validated by the Gerontology Research Group (GRG). She is currently the oldest known person living in the U.S. state of Minnesota.

Erna Zahn was born in Winnebago County, Wisconsin on 14 April 1908 to Henry and Olga (née Kloehn) Miller. She had one older brother, Herbert, and two younger sisters, Adeline and Marjorie. As a young girl, she enjoyed horseback riding, often on Sunday afternoons, and sewing and swimming. Some of her favorite historical moments she’s had include riding in the rumble seat of a car from home to Mount Rushmore, while it was still under construction.

She married Meilahn Zahn in 1935. He was head of the Martin Luther College music department from 1962 to 1975. The couple had six children, four sons and two daughters. Her husband died in 1982. Longevity runs in her family: her mother died at the age of 95, and both her sisters died at the age of 97.

Zahn's age was verified by Robert Young and Waclaw Jan Kroczek, and validated by the GRG on 8 January 2022. She currently lives at Oak Hills Living Center in New Ulm, Minnesota, United States, at the age of 114 years, 84 days. She is currently the fourth-oldest living validated person in the United States, behind Bessie Hendricks, Mila Mangold, and Edie Ceccarelli. 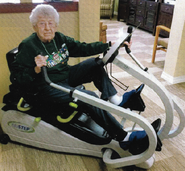