Bethea was born in Dawson, Georgia, United States, on 20 October 1909. She was the youngest of 12 raised by Frank and Emma Terry.  Her father was a Methodist reverend. The family later moved to Newark, where Bethea was a socialite and socially conscious. She was involved in projects with Stella Wright, a Newark social worker, whose name was on a public housing development that was demolished in 1994. Bethea, who lived most of her life in Newark, is the oldest living graduate of the Newark Public Schools system. The 1927 Central High School alumni appears to be among the oldest living people in the state. An assembly line worker for General Electric, Bethea also worked as a baby nurse for more than 30 years. 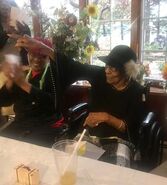