Ethel May Bowens (née Maple; born 26 August 1909) is an American supercentenarian who is the oldest known person living in the U.S. state of Oklahoma. Her age is currently unvalidated by the Gerontology Research Group (GRG).

Ethel Bowens was born in Seward, Oklahoma, USA, on 26 August 1909. Her father, William Maple, was a farmer and her mother, Susie Osborne, was a homemaker. Her family attended a Guthrie-area Baptist church. She went to Sunday school and later taught in Sunday school.

On 3 May 1925, she married Volna T. Bowens Sr. (1902–1989). They were married for 17 years before having their first child together. They had 6 children and had twins when she was 43. She celebrated her 110th birthday in August 2019. At that time, she had 29 grandchildren, 54 great-grandchildren and 46-great-great-grandchildren. Bowens said the secret to a long and happy life is "staying married to the same man, not smoking or drinking, and following God". 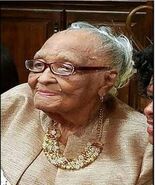 Bowens in an undated photo.

Bowens on her 110th Birthday.