Ethel May Caterham (born 21 August 1909) is a British supercentenarian who is currently the oldest known living person in the United Kingdom since the death of Mollie Walker on 22 January 2022. She is also one of the oldest known survivors of COVID-19, recovering from the disease in 2020 at the age of 110. Her age is currently unvalidated by the Gerontology Research Group (GRG).

Caterham was born on 21 August 1909 in Shipton Bellinger, Hampshire, England, and grew up in Tidworth, Wiltshire, England. She was the second-youngest of eight children. In 1927, at the age of 18, she got a job as a nanny to a British family in India, and travelled alone for three weeks by ship to India. She worked there for three years before returning to England.

In 1931, Caterham met her future husband Norman, a major in the British Army, at a dinner party. The couple married in Salisbury Cathedral where Norman was a choirboy and they lived together in Harnham, England, before they were stationed in Hong Kong and Gibraltar.

While living in Hong Kong, Caterham started a nursery for local and British children where she taught English, games, and crafts. While in Gibraltar, she and her husband started their family, eventually raising two girls back in the UK.

Caterham has lived in Surrey, England, for more than 50 years. She drove until she was 97 years old and was a regular bridge player in her centenarian years. She currently lives in a care home in Ash Vale, Surrey.

In 2020, at the age of 110, Caterham contracted COVID-19 during the coronavirus pandemic. However, she successfully recovered, making her one of the oldest known survivors of the disease.

Caterham celebrated her 111th birthday in August 2020 with a tea party and a visit from the Mayor of Surrey Heath. A week beforehand, she was interviewed along with her granddaughter on BBC Radio Surrey.

Caterham on her 106th birthday in 2015 with the Mayor of Surrey Heath, Councillor Joanne Potter

Caterham celebrating her 106th birthday in 2015

Caterham on her 109th birthday in 2018 with the Mayor of Surrey Heath, Councillor Dan Adams

Caterham celebrating her 111th birthday in 2020

Caterham celebrating her 112th birthday in 2021 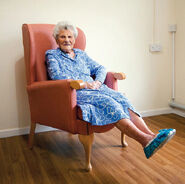 Caterham in her supercentenarian years