Etta Mae "Ettie May" Greene (née Thomas; 8 September 1877 – 26 February 1992) was an American supercentenarian, who was in her lifetime recognized as the oldest living person in the United States, but the verification of Lucy Hannah, who was believed to be older than her and also outlived her, meant she lost the "Oldest Living American" title. However, the subsequent debunking of Hannah's claim in 2020 now reveals that Greene was indeed the oldest known living American for the final 3 years of her life.

She was born in Wayside, West Virginia to Lewis and Amanda (née Green) Thomas and worked as a seamstress and a farmer. She married Russell A. Greene and had nine children with him. Russell died in 1929, leaving Greene as a widow for more than 60 years. She attributed her longevity to "good, clean living" and a milkshake she drank daily. She died of a cold at the Springfield Comprehensive Care Center. She was survived by 4 of her 9 children, 21 grandchildren, 47 great-grandchildren and 37 great-great-grandchildren. There was also a history of longevity in her family: her son Guy Jennings Greene (1902–2002) lived to be 99, her daughter Hallie Monroe (1907–2004) lived to be 96, her daughter Ada Louise Dillon (1910–2013) lived to be 102, her son Russell Ashby Greene (1916–2008) lived to be 91. 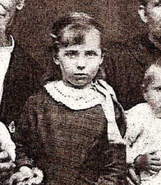 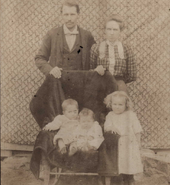 Greene at age circa 35

Greene in an undated photo

Greene in an undated photo