Eunis Palmer Pryce called “Aunt Eun” (20 April 1909 – 20 February 2021) was a Jamaican supercentenarian whose age is currently unvalidated by the Gerontology Research Group (GRG). She was the oldest known living person in Jamaica for the final five days of her life.

Eunis Pryce was born in Jamaica on 20 April 1909. Reportedly, her father died in 1960s at age of 105. Pryce gave birth to six children, four girls and two boys, but two of the girls have predeceased her. During her early life, she used to go out to the fields with her husband, then a farmer, to cook lunch for everyone, using produce from the farm.

When interviewed on her mother's 108th birthday in 2017, the daughter, Valda Pryce, said that Eunis could still read Bible and Daily Bread. According to her, one of the reasons for her long life, was because "she used to the ol'-time food, no fertiliser". Eunis Pryce was reported to be still able to see well enough to read without glasses even though her hearing was not the best.

She became the oldest known living person in Jamaica, following the death of 111-year-old Eslin Mulgrave-Collins on 15 February 2021.

Pryce died five days later in Borobridge, Saint Ann, Jamaica on 20 February 2021 at the age of 111 years, 306 days. At time of her death, she had four living children, 12 grandchildren, and 13 great-grandchildren.

Pryce in an undated photo

Pryce displays the plaque she got from councillor Winston Brown, celebrating her 109th birthday in 2018 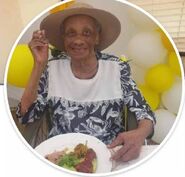