Eva Morris (née Sharpe; 8 November 1885 – 2 November 2000) was a British supercentenarian who was recognised by The Guinness Book of Records as the oldest living person in the world at the time of her death. Her age is also validated by the Gerontology Research Group.

Morris was the world's last surviving person who was verifiably born in 1885 and the earliest-born person to live in the 2000s. She is also the third-oldest British person ever recorded, after Charlotte Hughes and Annie Jennings.

Morris was born on 8 November 1885 in Newcastle-under-Lyme, Staffordshire, England. She worked as a domestic help. She was married to Joseph Morris, who died in the 1930s. They had one child, Winnie, who died of cancer in 1975 aged 62.

Morris attributed her longevity to "whisky and boiled onions". She lived in her own flat until she was 107. After suffering from a chest infection, she moved in to a nursing home in Stone, Staffordshire. In her final years, she was deaf and partially sighted. She died on 2 November 2000, six days before she would have celebrated her 115th birthday.

Following the death of 113 year-old Ruby Gilliam on 22 October 1998, Morris not only became the last surviving British person born in 1885, but also the last born before 1887, as she and Gilliam had outlived everyone in Britain born in 1886.

Morris became the oldest living person in the United Kingdom, as well as in Europe, following the death of 115 year-old Annie Jennings on 20 November 1999. At the time of her death on 2 November 2000, Morris was the third-oldest British person ever recorded, and she remains in that position as of 2020.

Following the death of 119 year-old Sarah Knauss on 30 December 1999, Morris became the oldest living person in the world whose age has been authenticated. She was officially recognised as the world's oldest person by The Guinness Book of Records in March 2000.

Morris was the earliest-born validated person to have survived to the year 2000, after Sarah Knauss (born in 1880) died two days before the year began on 30 December 1999. Morris later became the last surviving validated person born in 1885 following the death of Myrtle Dorsey on 25 June 2000, who was two weeks younger. 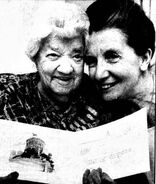 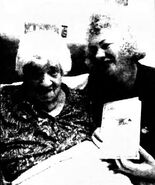 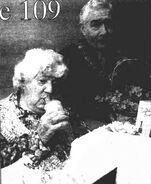