Ezra Edward Hill (born 19 December 1910) is an American supercentenarian who has been the oldest known living man in the United States since the death of Lawrence Brooks on 5 January 2022. In addition, he is also believed to be the oldest living American veteran of World War II, and the oldest known living person in the US state of Maryland. His age is currently unvalidated by the Gerontology Research Group (GRG).

Ezra Hill was born in Maryland on 19 December 1910. Growing up in Baltimore in the 1920s, he played center field in the Negro Baseball League. In 1937, his mother lent him $50 to open a shoe store, offering the advice: “There are enough doctors and lawyers. You should sell shoes.” Naming his business Avalon Shoes and setting up shop in Gay Street in Baltimore, Hill remained in business for around 60 years before his retirement in the 1990s.

In 1943, at the age of 32, Hill was drafted to fight in WW2, and was stationed in Normandy, France. Speaking of his experiences decades later, he remarked "I saw the greatest military invasion in the world. No one could form an invasion like this but the Americans. It you saw it, you could never forget it.”

In spite of his longevity, Hill nonetheless had experienced brushes with death - while serving in France during the war, a military truck weighing six tons mistakenly ran over him, where he recalls hearing the horrified driver telling the doctor he had accidentally killed him. However, aside from injuring his back, Hill managed to recover without any broken bones. After the conclusion of the war, he returned to his hometown of Baltimore and continued his career as a shoe salesman.

His store was frequently visited by prominent figures during the Civil Rights era. When Malcolm X arrived in Baltimore, he advised Hill to “cater to the masses, not the classes.” He also crossed paths with Martin Luther King Jr. and Muhammad Ali in the 1960s.

Hill lived independently in Forest Park even as a centenarian, before deciding to move in with his daughter in Catonsville. He also drove until around the time of his 100th birthday in 2010. He has been married to his wife Doris (born 3 December 1921) for 81 years as of December 2021.

Following the death of Bessie Harding on 16 February 2022, Hill became the oldest known living person in the US state of Maryland. 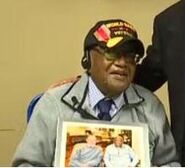 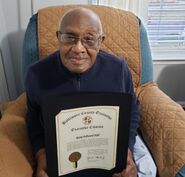