Florence Shizuko Kamei (née Kaneyama; 6 August 1904 – 15 September 2012) was an American centenarian who was the oldest known person in Hawaii at the time of her death.

Florence Kamei was born in Kekaha, Hawaii, USA on 6 August 1904. Her parents were Japanese immigrants Masazuchi Kaneyama and Aki (née Fujimoto) Kaneyama. She had at least three siblings. 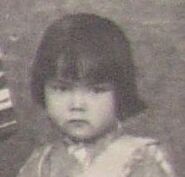 As a young girl.