Frances Abbracciamento (9 May 1913 – 25 July 2021) was an American centenarian who was one of the oldest known survivors of COVID-19, having recovered from the disease at the age of 106.

The daughter of Italian immigrants, Abbracciamento was born on 9 May 1913 in Brooklyn, New York, USA. She attended Brooklyn College for time before working as a millinery buyer. Soon after, she met her husband, Salvatore, and they got married when she was 26. Together they had four children and started a restaurant in Canarsie, Brooklyn, called Abbracciamento on the Pier.

After her husband's death in 1966, Abbracciamento ran the Bay Terrace restaurant in Breezy Point, Queens, New York, in the early 1970s. Abbracciamento was active in politics; she was a State Committee Woman for the Democratic Party and she was School Board President for District 19 for 13 years. She also once met President Dwight D. Eisenhower.

Abbracciamento retired from working at her restaurant when she was 86. She suffered a broken hip and shoulder when she was 101. As of May 2020, she had nine grandchildren and 15 great-grandchildren.

In late March 2020, during outbreak of the coronavirus pandemic, she was diagnosed with pneumonia. By the end of April, she had made a near-full recovery, and it was only then that her family learned she had in fact caught COVID-19 after being tested for the virus. She celebrated her 107th birthday the following month. 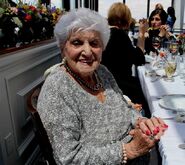 Abbracciamento celebrating her 104th birthday in May 2017

Abbracciamento celebrating her 105th birthday in May 2018