Francis Bradford Smith (3 March 1908 – 18 August 2018) was an American supercentenarian whose age is currently unvalidated by the Gerontology Research Group (GRG). He was one of the top 10 oldest known living men in the United States at the time of his death.

Smith was born in Maine, USA, on 3 March 1908. He graduated from the New England Conservatory of Music and went on to become one of the first violinists in the Chicago Orchestra.

He worked for decades as an electrical engineer and fathered three sons.

On his 75th birthday in 1983, he married a woman named Priscilla, who was 48 at the time. They travelled all around the world together.

Smith celebrated his 110th birthday and the couple’s 35th wedding anniversary on 3 March 2018. On being asked the secret to long life, he joked that “the most important thing in life is to keep breathing. If you can do that, then you can accomplish anything you wish.”

Francis Smith during his college years.

Francis Smith on the Fourth of July.

Francis Smith on his bike (undated). 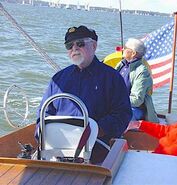 Francis Smith sailing into his 90s.

Francis Smith on his 102th birthday at Planet Fitness. His wife Priscilla is to the left in the "PF" shirt.

Francis Smith and his wife Priscilla on his 105th birthday at Planet Fitness in Naples, Florida. 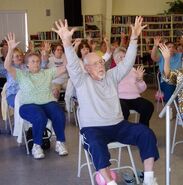 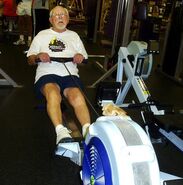 Francis Smith working out at the gym at age 105.

Francis Smith working out at the gym at age 105.

Francis and Priscilla Smith in 2015.

Francis Smith at age 110, with his sons.