Francisco Juarez Iglesias [Spanish: Juárez] (born 8 May 1911) is a Mexican supercentenarian whose age is currently unvalidated by the Gerontology Research Group (GRG). He is currently the oldest known (documented) living man in Mexico, since the death of 112-year-old Jorge Duran Coral on 21 July 2021.

Francisco Juarez Iglesias was born in Teziutlan, Puebla, Mexico on 8 May 1911 (claims 7 May) to parents Francisco Juárez Velasco and Josefa Iglesias Barrientos. Both his parents died when he was very young, leaving him orphaned by the age of 6. As such, he was raised by two of his aunts, named Concepcion and Esther.

He began his studies at a local high school in Teziutlan, where he attended until the fifth grade of primary school, then later continued his studies in Mexico City. Upon graduating, he returned to Teziutlan, where he began working in a grocery store. Later he had the opportunity to work in the federal finance offices, where he first learned about the stamp office, at which time this institution received taxes from local citizens. He then worked in the city of Puebla in a sock factory.

Later, he started a business consisting of a small candy store inside his home, which he called "Dulcelandia", which he has maintained for 70 years, and works with his seven children and his wife Maria Luisa Valdés, with whom he married in 1950.

On 30 January 2020, the Teziutlan City Council recognized him for his career, naming him a "Distinguished Citizen", receiving an award from Mayor Carlos Peredo Grau, noting that "[he] has led a very long and fruitful life, being today the oldest resident of our city”.

Francisco Juarez Iglesias currently lives with his wife Maria Luisa Valdés (aged 96 in May 2021) in Teziutlan, Puebla, Mexico at the age of 111 years, 49 days (claims 111 years, 50 days). At age 110, Juárez Iglesias reads the news on his tablet, video-calls his family and friends, streams his favorite TV series, and regularly interacts with the tenants in the properties he owns. 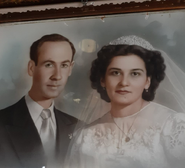 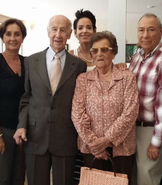