Frieda Szwillus (née Hennig; 30 March 1902 – 21 September 2014) was a verified German supercentenarian who had been Germany's oldest living person with the passing of Gertrud Henze on 22 April 2014 until her own on 21 September 2014. Szwillus was the last German person to be born in 1902.

She was born in Dessau, today in Saxony-Anhalt, as Frieda Hennig on 30 March 1902 and had 6 siblings of whom 3 reached almost 100. In 1908 she and her family moved to Erla. Szwillus was married two times, raised one biological and three stepchildren and outlived all of them. Frieda Szwillus has always lived modestly and sparingly. One reason for this might be that she worked for less money in a hosiery mill.

At the end of 2011 Szwillus was bedridden for some weeks but recovered. She was living at home in Raschau with her family existing of three other generations. Szwillus was in a good physical, needing no medicine. Her mental condition declined in consequence of suffering from dementia so there was no short-term memory. It was reported that Szwillus being sometimes quiet upset talked detailed about quarrels with her siblings that happened almost 100 years ago.

Szwillus’ family traced her longevity to having a lively family life. She often visited her siblings but never went on vacation. Furthermore she was only physically active during her youth. She also enjoyed knitting and embroidering.

Frieda Szwillus died on 21 September 2014 at age 112 years and 175 days after spending her last weeks in a nursing home. She was preceded in death by 111 year-old Johanna Klink who became the oldest living person of Saxony but also Germany. 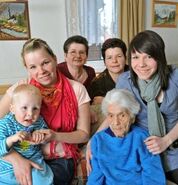 Frieda Szwillus at age 109, with family. 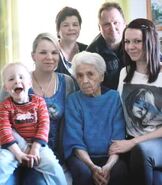 Frieda Szwillus at age 110, with family.
Community content is available under CC-BY-SA unless otherwise noted.
Advertisement