Fu Xinde claimed to have been born in Xiangcheng, Henan, Qing dynasty (now China) on 11 January 1902 (claimed 1901, and some other sources claimed 1899). He was the second of five sons. His parents were farmers.

Xinde studied letters and martial arts in private schools. In 1927, he became a soldier, and studied Western medicine to the missionary hospital (ruled by the local Christian church). He also learned to speak English.

Beginning of the War

Following the beginning of the war, Xinde participated to the battles of Shanghai (13 August), Nanjing, Wuhan and the battles of Changsha. In 1943, he entered in Yunnan Province with the army.

On 4 June 1944, the army tried to recapture Longling, but failed. Following this, Xinde assisted the battles of Mount Song, Mangshi, Tengchong, and also to Pingda siege.

Xinde was also impressed by a squad chief of the 260th regiment of the 9th company of the 87th division of the army, named Li Gui [Chinese: 李桂]. On 6 June 1944, the Japanese attacked for the first time at Longling's front. Gui directed the response, but was injured at head and became blind.

During the battle of Mengling's slope, Fu Xinde headed 3 doctors, 4 nurses, and a lot of stretcher carriers for helping injured people and burying bodies. They even saw the body of a 30-year-old man, Gao Jiejun [Chinese: 高介军], bitting the ear of a Japanse soldier.

On 29 October, the battle of Longling (where the Chinese army has been much stronger than the Japanese army), the greatest counteroffensive in western Yunnan, began. The fight lasted four months, and Longling was recaptured on 3 November. The front line went back: Wanding Town was recaptured by the Chinese Army on 20 January 1945, and the Japanase army was chased of the province.

On 11 May 1945, at the time of the Chinese counteroffensive in Henan and Hubei, he stopped carrying injured people from Taiping to Shidian (both places are in Yunnan province), to stay in Taiping and direct the operations like injured people transport. Before, Baoshan county had send thousands of horses and mules to help repairing the roads, building fortifications and carrying materials. Xinde cried while remembering the thousands of women who carried food supplies through dangerous roads and high mountains (even sometimes with having their babies at breast); some of them slipped on the moss on roads, and some others died.

Xinde told the Chinese victory on Japan: "The Japanese army surrendered and I changed of farm. I never touched a firearm again! I'm a doctor!"

Because of his poverty, Xinde never returned to his natal county. In 1945, he married Li Zhuzhi [Chinese: 李竹芝], a woman from Longling who was 20 years younger than him. They had six sons (three alive as of 2004) and a daughter (Fu Zhengqin [Chinese: 付政琴], born in 1958).

Xinde's house was burgled three times, and thiefs bound him. Although his family was poor, he stayed calm and never complained, saying: "I need to work. I'm a surgeon. I've three sons. I need to survive." Xinde had more than 700 flasks of medicines in his house. According to him, he "collected Chinese medicines through mountains and forests during years" (and about the third of his medicines have English labels).

After the war, Xinde was unfairly considered as a counter-revolutionnary, and was sent in a camp of reeducation by working. Because of that, his children were discriminated by the communists. Except the sixth son (who went to high school, became a soldier, and had a better work), all the children have given up school at primary school. Xinde's daughter described school as a "torture" because of these discriminations.

In 1969, Xinde was sent to work again at Mount Song, where he fought the Japanase army 25 days earlier.

In 1973, Xinde's wife had a stroke and hemiplegia because of malnutrition and nervous breakdown, and was paralyzed in her bed. However, he managed to healed her with home medicines, and she walked and talked again. According to his son, Xinde also takes care of poor farmers who haven't enough money to go at hospital, and this for free. Actually, because he no longer was an office medicine in the army, he isn't legally qualified to be a doctor.

On the occasion of the 65th birthday of the Chinese victory on Japan, Xinde was interviewed in his home in Longshan, Longling County, Yunnan, China. He told the journalist the counteroffensive in Yunnan. When asked for the secret of his longevity, he replied that he was vegetarian, and that he is humble and lenient, and forgives people. He said that the life was a serie of difficulties that we must overcome to learn things.

Four days before his 109th (claimed 110th) birthday, his wife died of illness at the age of 88 or 89. In October 2011, Xinde was reported to have a good eyesight but poor hearing.

If validated, Xinde would have been the oldest living man in the world for 8 days, from the death of Salustiano Sanchez on 13 September 2013 to his own death on 21 September 2013, being older than Arturo Licata.

Xinde would also have been the oldest living man in Asia from the death of Jiroemon Kimura on 12 June 2013 to his own death on 21 September 2013, being older than Jokichi Ikarashi and Sakari Momoi (who would be his successor). 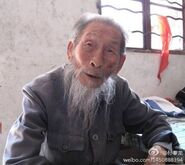