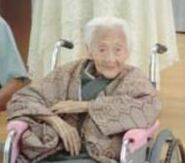 Fui Onigahara at the age of 109