Fusa Tatsumi [Japanese: 巽フサ] (née Taniura; born 25 April 1907) is a Japanese supercentenarian whose age is validated by the Gerontology Research Group (GRG). She is currently the oldest known living person in Japan, and is also the second-oldest person ever from Osaka Prefecture, behind Misao Okawa.

Fusa Tatsumi was born in Yao City, Osaka Prefecture, Japan on 25 April 1907, as the fifth (second daughter) of six siblings.

After graduating from elementary school, she practiced tea ceremony, flower arrangement, Okoto (a classical Japanese musical instrument), and obtained a diploma that could be taught to others as instructor.

She worked in a family orchard until about 55 years old (when her husband died), growing peaches, plums, and grapes.

She carried a basket of fruits harvested in her orchard on her back and climbed up and down the mountain of the orchard. Her family says her work in the orchard has trained her body, which may be one of the factors for her longevity.

Fusa was good at growing chrysanthemum flowers as a hobby. However, she fell when her clothes got caught in a block of her flowerbed, and she broke her femur when she was in her 70s. There is a bolt in her femur. Other than her injury at that time, she has never been seriously ill or injured.

Fusa lived at home with her family until just before she was 107, and was able to do most of herself. She also managed her medicine herself.

Tatsumi became the oldest validated living person in Japan, following the death of Kane Tanaka on 19 April 2022. Tanaka's death was announced on 25 April, which was Tatsumi's 115th birthday.

Tatsumi currently lives in Kashiwara, Osaka, Japan, at the age of 115 years, 62 days. She is currently the fifth-oldest validated living person in the world, behind Lucile Randon, Tekla Juniewicz, Maria Branyas Morera, and Casilda Benegas. 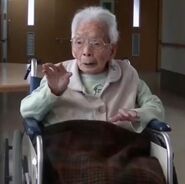 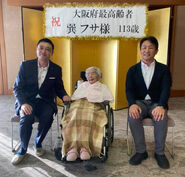