Gabrielle Ormand (née Thebault [French: Thébault]; 24 February 1909 – 8 October 2021) was a French supercentenarian who is currently unvalidated by the Gerontology Research Group (GRG). At the time of her death, she was the third-oldest living person in France, after Lucile Randon and Valentine Ligny.

Gabrielle Ormand was born in a farm in Saint-Aignan, Sarthe, Pays de la Loire, France on 24 February 1909. Her parents were Ernest Thebault and Zelie Boblet.

At age 80, Ormand had an heart attack, and she takes heart medication since this. In 1989, her brother Ernest ended his life.

At the age of 107 in 2016, Ormand was reported to still live in her flat. She had a home help since September 2015. She was reported to have some difficulties to hear, but to still be lucid and to have a good memory. She sometimes played Scrabble with her daughter.

On 1 December 2016, aged 107, she moved to the residence Charaintru, in Savigny-Sur-Orge. Following the death of 110-years-old Marie Casanova of Paris on 13 September 2019, she became the oldest known living person in Ile-de-France. 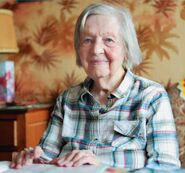