Dr. Galo Leoz-Ortin (22 April 1879 – 23 January 1990) was a validated Spanish supercentenarian and ophthalmologist who was the oldest living person in Spain at the time of his death.

Dr. Leoz-Ortin was born in Alcaniz, Aragon, Spain on 22 April 1879. He moved to Madrid in his teens. A renowned ophthalmologist, he became professor of Ophthalmology at the Faculty of Medicine of Madrid, University of Madrid, where he pioneered the study of degeneration and regeneration of the optic nerves, as well as corneal transplantation. He became President of the Spanish Society of Ophthalmology, Honorary President of the International Society of Neurology, and an honorary member of the national societies of ophthalmology in the United Kingdom and Italy. Dr. Leoz did his last consultation at the age of 103. He loved classical music, especially Baroque, and had was also a fan of opera. At the age of 100, he still attended concerts, but as all of his friends were long-since deceased, he expressed sadness over being alone. He was the father of the architect, sculptor and candidate for the Nobel Peace Prize, Rafael Leoz, of whom he outlived by over a decade. His other son, Dr. Gustavo Leoz (1918–2011), followed in his footsteps in also becoming a renowned ophthalmologist and frequent collaborator. 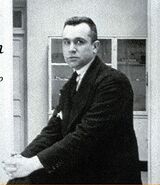 Leoz-Ortin as a young man

Leoz-Ortin as a mid-age man

Leoz-Ortin (with his characteristic white hat) celebrating his birthday with his family, date unknown

Leoz-Ortin writing on his machine (undated)