Geertje Kuijntjes (19 July 1905 – 24 December 2019) was a Dutch supercentenarian whose age has been validated by the Gerontology Research Group (GRG). She was the oldest living person in the Netherlands, as well as the last living Dutch person born in 1905, since the death of 110-year old Nelly de Vries-Lammerts on 27 August 2015.

Geertje Kuijntjes was born to a family of six children, of whom only two survived; two of them died after about three months to have lived, the other two died as infants. Her younger brother, Arie Kuijntjes, died at the age of 66, just a couple of days before entering 1977.

Kuijntjes had lived in the town of Gorinchem her entire life. She was a seamstress until her retirement. Kuijntjes spent the last years of her life in a retirement home in Gorinchem, Netherlands.

Despite her age, Kuijntjes had done a lot of things after her retirement; she was still able to go on holiday on her own until age 100 and to make big journeys until the age of 102. She also lived on her own until the age of 105. Kuijntjes participated in the International Four Days Marches Nijmegen forty times until the age of 88. In 2016, at the age of 111, she was able to witness the 100th edition of the marching event with help from the 'Ambulance Wens' foundation (a foundation of volunteers who provide free last-minute requests for non-mobile terminal patients daily, using specially designed ambulances). She saved many of her earned medals (of whom one dates back to 2 July 1933, when she completed the 40km edition). Besides that, she also joined multiple marching events in other countries, such as Switzerland (Bern), Austria (Vienna) and even Israel. Kuijntjes also learned English and loved ice cream and dancing.

Kuijntjes died in Gorinchem, South Holland, the Netherlands, on 24 December 2019, at around 00:30 AM, at the age of 114 years, 158 days. At the time of her death, she was the seventh-oldest validated person in the world (behind Kane Tanaka, Lucile Randon, Francisca Celsa dos Santos, Jeanne Bot, Shigeyo Nakachi, and Antonia da Santa Cruz) and the third-oldest in Europe (behind Lucile Randon and Jeanne Bot). Following her death, Anne Brasz-Later became the oldest living person in the Netherlands.

She is currently the second-oldest validated person ever from the Netherlands, behind Hendrikje van Andel-Schipper. 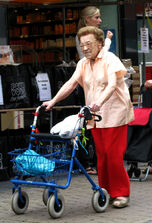 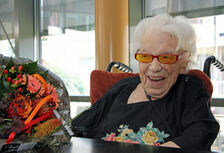 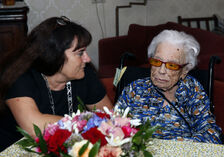 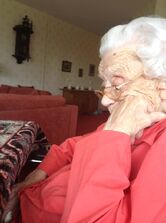 Kuijntjes in an undated photo.