Geertruida (Truus) Draaisma (25 February 1902 – 12 August 2011) was a Dutch centenarian who was the oldest known living person in The Netherlands, following the death of 108-year-old Wijtske van Dijk-Meindersma on 10 November 2010.

Geertruida Draaisma was born on 25 February 1902 in Makkum in the province of Friesland, The Netherlands. When she was just a child, a fortune teller would've told her that she would became the oldest member of the family.

She worked as boss in a store for hats. Later in her live, she moved to The Hague, South-Holland, together with her sister. Both her sister and Ms. Draaisma got an intracranial bleed, of whom only Ms. Draaisma survived. Eventually, she moved to retirement home De Hofwijck in Leeuwarden in 1993. At the age of 108 years old, she mentioned that she reached such a high age due to a lot of smoking and drinking. At that time, she also was healthy, still watched television sometimes, had a good mind and could still walk in the local park every day, but her eyesight and hearing became poor. On her 109th birthday in 2011, it was mentioned that, even though she sometimes forgets things, she still knew about her birthday.

Draaisma died on 12 August 2011 at the age of 109 years, 168 days, making her the third oldest person in The Netherlands in a row who didn't became a supercentenarian. 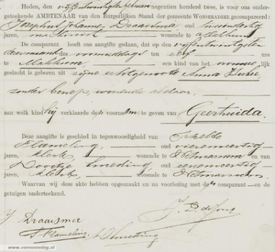