Germaine Degueldre (26 September 1900 – 11 May 2012) was a Belgian supercentenarian whose age has been validated by the Gerontology Research Group. At the time of her death, she was the oldest living person in Belgium, as well as the last living Belgian born in the 19th century.

Germaine Degueldre was born in Binche, Belgium on 26 September 1900. Later in her life, she married Yvon Degueldre. She was a housewife and assisted her husband who managed the family garage. The couple had two sons, Yvon et Max.

She became a widow when her husband died at age 88.

Her passions were music and drawing. She moved to retirement home Clairfayt in 2006. She was described as calm and very lucid and was very healthy at an advanced age; Germaine has always taken very few medications. She sleeps a lot, eats very well even though she has a small weakness for chocolate. Sometimes she recites to us poems from her childhood, she plays Lotto, dominoes with other residents. It is his secret of longevity, one of the Healthcare worked said about her.

Germaine Degueldre died unexpectedly (as she was still healthy the day before her death) on 11 May 2012 in Waudrez at the age of 111 years, 228 days. Following her death, Fanny Godin became the oldest living person in Belgium. 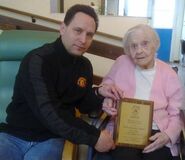 Germaine Degueldre receives an honorary plaque from Mon. Anthony Croes-Lacroix on behalf of the Supercentenarian Research Foundation in February 2011.

Germaine Degueldre on her 111th birthdaty.