German Cifuentes Higuera [Spanish: Germán] (12 May 1910 – 3 September 2020) was a Spanish supercentenarian whose age is currently unvalidated by the Gerontology Research Group (GRG). At the time of his death, he was the second-oldest known living man in Spain, behind Saturnino de la Fuente Garcia.

Cifuentes Higuera worked as an agricultural. His wife died during the Civil War, three years after their wedding. The couple had one daughter: Teo Cifuentes (aged 82 in 2018).

Higuera turned 110 on 12 May 2020. At the time of his birthday, he was the third-oldest living male in Spain behind Saturnino de la Fuente Garcia, and Joaquim Illas Illas. 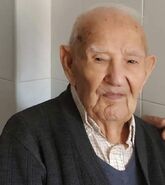 Cifuentes Higuera in May 2019