Gertrude Baines (6 April 1894 – 11 September 2009) was an American supercentenarian who was the oldest living person in the world from the death of Maria de Jesus on 2 January 2009 until her own death on 11 September 2009.

Born in Shellman, Georgia, she recalled that her first memory was that of being in a car ride to Canada. She later married Sam Conly at a "very young age" and had a daughter, Annabelle, who died of typhoid fever at age 18. Baines lived at the Western Convalescent Home in Jefferson Park, Los Angeles when she died.[1] She lived on her own until she was 105. When she was 112 said she had never had a seriously sick day in her life but, in July 2009, she was hospitalized.

When asked what she credited to her longevity, she answered, "God. Ask him... I took good care of myself, the way he wanted me to."[2]

Baines, a daughter of former slaves, cast a vote for Barack Obama in the 2008 US presidental elections. The only time she voted before was for John F. Kennedy.[3]

Baines was the last living person verified to have been born in 1894, and one of the 30 longest-lived persons ever. 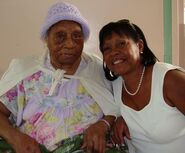