Gertrude Annie Kingston (née Brown; 1 February 1909 – 28 July 2021) was a British supercentenarian whose age is currently unvalidated by the Gerontology Research Group. She was the oldest living person in the United Kingdom, from the death of Lilian Priest until her own death nearly two months later.

Kingston was born in Farnborough, Hampshire, England, UK on 1 February 1909. One of her earliest memories is her father leaving to fight in World War I. Her father was killed in 1917 after making his way out of the trenches in order to pay a visit to home.

As a young adult, Kingston learned to play the violin and the cello. In 1954, she started working for the School of Military Survey, where she met her future husband, Ernie Kingston. The couple were married for 23 years from February 1960 until Ernie's death in April 1983.

Kingston was a member of the Women’s Institute for much of her life, and for many years she typed out the newsletter for her village. In 2009, at the age of 100, she moved into a residential home in Woolton Hill, Hampshire, England. She became a supercentenarian in February 2019. Kingston has been the oldest living person in the United Kingdom since the death of Lilian Priest on 6 June 2021.

On 23 January 2021, Kingston received her first dose of the Oxford–AstraZeneca COVID-19 vaccine, making her one of the oldest people to receive the vaccine. She celebrated her 112th birthday nine days later on 1 February.

Kingston (right) with her family in an undated photo

Kingston celebrating her 105th birthday in 2014 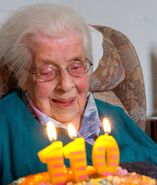 Kingston celebrating her 110th birthday in 2019 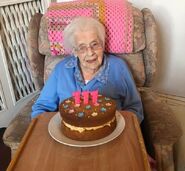 Kingston celebrating her 111th birthday in 2020

Kingston on her 112th birthday in February 2021 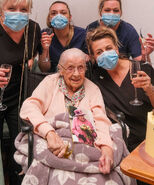