Gertrude Tonpon Weaver (née Gaines) (4 July (or April) 1898 – 6 April 2015) was an American supercentenarian of mixed race (mainly African-American, Caucasian-American, and Native-American) who was, briefly for five days, the oldest living person in the world following the death of Misao Okawa on 1 April 2015, until her own death. Upon her death, Jeralean Talley became the world's oldest validated living person. Weaver had the second-shortest reign of the world’s oldest living person on record, behind Emma Tillman, who held the title for only four days.

Weaver was born in Lafayette County, Arkansas to Charles Gaines (b. May 1861) and Ophelia Jeffreys (b. December 1866), who were African American sharecroppers. She married Gennie Weaver on 18 July 1915 and had four children. She was widowed in 1969. At the time of her 116th birthday one son, Joe, was still alive at age 93 and turned 94 the day after his mother's death. At 104, she moved to the Silver Oaks Health and Rehabilitation Center in Camden, Arkansas after she broke her hip. With rehabilitation, she recovered from the injury and was able to move back to her home with the help of her granddaughter. At 109, she returned to Silver Oaks Health and Rehabilitation. Her health declined somewhat after her 115th birthday but she still left her room for meals and activities at the nursing home. Weaver did not have any chronic health problems typical of people her age; she slept well and did not drink alcohol or smoke.

Weaver told the Associated Press that there were three factors that have contributed to her longevity: "Trusting in the Lord, hard work and loving everybody." Weaver added a fourth factor when she told Time magazine that trying to do your best is another factor adding: "Just do what you can, and if we can't, we can't" or, in other words, "Kindness".

At her 116th birthday celebration, the Gerontology Research Group (GRG) announced that they had verified Weaver's age making her the oldest verified living American and they presented her with a plaque inscribed with her title as oldest American on it. The GRG and Guinness World Records established that Weaver was older than Jeralean Talley, who was previously thought to be the oldest; with Weaver's death, Talley became the oldest verified individual in both the United States and the world. Weaver also received a letter from President Barack Obama, and the Mayor of Camden declared her birthday "Gertrude Day."

On 6 April 2015, Weaver died from pneumonia aged 116 at Silver Oaks Health and Rehabilitation Center. She was the fourth to last surviving person from the 1800s as well as the third to last American from the 1800s. 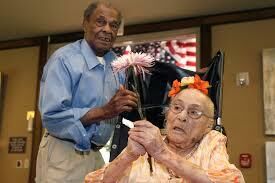 Gertrude Weaver and her son Joe Weaver on her 116th birthday in 2014.
Português do Brasil
Community content is available under CC-BY-SA unless otherwise noted.
Advertisement