Gudrun Nymoen (née Solberg; 26 October 1910 – 8 July 2021) was a Norwegian supercentenarian whose age is currently unvalidated by the Gerontology Research Group (GRG). She was the oldest living person in Norway since the death of Petra Hogetveit on 23 May 2020 until her death.

Gudrun Nymoen was born in Osen, Hedmark, Norway on 26 October 1910. She had experienced both World War I and World War II, received electricity in her home as a 30-year-old and watched her four children grow up and retire. Nymoen was a driven flatbread baker, remembering the time when she could stand and bake all day - to the neat daily salary of one penny. She has lived in Osen all her life, and until the mid-1940s the living room on Tverenberget was the home of her family, which then consisted of the married couple and children Paul and Astrid. Although Nymoen believed she has had a pretty untrammeled life, this is where she experienced the two most dramatic events of her life - when the house burned in 1944 and seeing airplanes landing on Lake Ocean at the beginning of World War II. However, the family who lived in the thickest forest, was protected from much of the consequences of the war. Nymoen had traveled extensively, both at home and abroad, and had seen and experienced more than most.

Nymoen became the oldest living person in Norway following the death of Petra Hogetveit on 23 May 2020.

By March 2021, she had already received both doses of a COVID-19 vaccine.

Nymoen died in Osen, Innlandet, Norway on 8 July 2021 at the age of 110 years, 256 days. Following her death, Gunhild Lyse became the oldest living person in Norway. She was the last known person in Norway born before 1913. 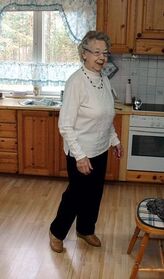 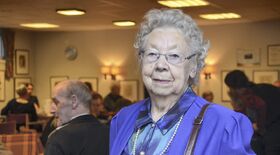 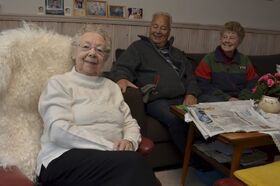 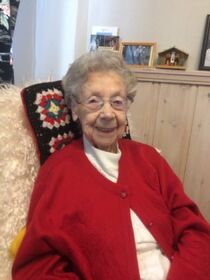