Guinness World Records (GWR) is an anually-published reference book, containing information about world records and extremes, including both human achievements and natural records. The book itself holds a world record, since it is the best-selling copyrighted book of all time. In the United States, it is also one of the most frequently stolen books from public libraries. 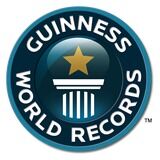 For many decades (since 1955), GWR has had a gerontology section, keeping track of the oldest people in the world.

It is published by Jim Pattison Group.