Gustav Gerneth (15 October 1905 – 21 October 2019) was a German supercentenarian whose age is currently unvalidated by the Gerontology Research Group (GRG).

He was believed to have been Germany's oldest living person since the passing of Herta Oeser on 13 March 2016. If validated, he would be the oldest person ever to be born and die or living in Germany (however, this title is still held by verified Maria Laqua).

Gustav Gerneth was born on 15 October 1905 in Szczecin [German: Stettin] in the province of Pomerania, Prussia, which was then part of the German Empire but is now Poland. There, he was trained as machinist and started his career by seafaring in 1924.

In 1930, he married his wife Charlotte Grubert, the daughter of his employer who owned a ship anchored in Havelberg. The couple raised three sons in Stettin, again. Mr. Gerneth serviced in World War II and was captured by Russian corps until 1947. Later the family moved to Havelberg and Gerneth worked in the local gas plant until his retirement in 1972. His wife died in 1988.

At the time of his 110th birthday in 2015, Gustav Gerneth was the seventh German man to become a supercentenarian. He was reported to have outlived his sons, being in their 80s, by the age of 109. Until the age of 107, he purchased everything on his own. Later, his family started taking care of him but Gerneth was still able to take care of himself, being interested in today's politics and sports.

On 15 October 2017, Gustav Gerneth celebrated his 112th birthday, being the first German man ever to do so. He was also the first ever German-born person to turn 113 (not counting emigrants) and the first man in the world since 2011 who turned 114.

Following the death of Masazo Nonaka on 20 January 2019, Gerneth became a candidate to the title of the world’s oldest man, as well as possibly the last surviving man born in 1905.

On his 114th birthday in 2019, he expressed his wish to celebrate his 115th birthday in 2020. Being asked for his secret of longevity, Gerneth trusted in good meals (always butter, never margerine), no alcohol or cigarettes but also no active sports.

At the age of 114, he was reported living still on his own in Havelberg, inhabiting the same apartment for more than 45 years. His granddaughter took care of him.

Gerneth with his wife, Charlotte, around 1930. 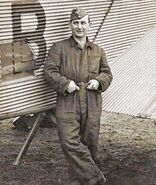 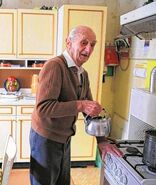 Gerneth (middle) on his 114th birthday on 15 October 2019 with his great-granddaughter Tina Endle (sitting, left), his granddaughter Christine Rattay (standing), Bernd Poloski, the Mayor of Havelberg, and his grandson Benjamin Endle (right).