Johann "Hans" Schornack (born 29 February 1912) is a German supercentenarian who is believed to be the oldest living man in Germany since the death of Heinrich Homann on 24 June 2020, and the oldest living German-born man since the death of Arnold Leissler of Poland on 13 March 2021. He is also the second-oldest known living person in North Rhine-Westphalia (behind an anonymous woman), and the third-oldest known living man in Europe (behind Andre Boite and an anonymous man of Ireland).

Hans Schornack was born in Essen, North Rhine-Westphalia, Germany on 29 February 1912. During the second World War, he was not drafted into the German military, which he later said he was very glad about due to being a self-described pacifist. He worked as a mechanic for Opel and Ford for several years before he became self-employed in the auto trade. He also worked in a kiosk on Frohnhauser Platz and sold tobacco products there. He drove a car until the age of 95.

In January 2021 at the age of 108, he received his COVID-19 vaccine, making him one of oldest people to receive the vaccine. In 2022, he was reported to have recovered from a mild case of the infection shortly before turning 110, making him the oldest (known) person in Germany to get COVID.

Schornack currently lives in North Rhine-Westphalia, Germany, at the age of 110 years, 128 days. Due to being born on leap day, he has only experienced his birthday 28 times throughout his entire life, with his most recent birthday having occurred in 2020. As a consequence, he would need to live to the age of 112 to reach his next birthday, when the next leap year occurs. He is the oldest known man ever born on leap day. 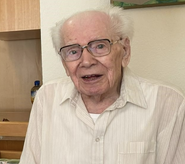