Henri Albert "Harry" Fransman (25 November 1911 – 25 September 2020) was a Belgian-born British centenarian who, at the time of his death, was the oldest known living man in the United Kingdom whose age has been validated by Oldest in Britain.

Fransman was born on 25 November 1911 in Antwerp, Belgium to Dutch-Jewish parents Jacques and Judith Fransman. He had three brothers (all deceased by 2018). The family emigrated to South Africa in 1920, when Fransman was eight years old.

Fransman obtained his degree in chartered accountancy at the University of the Witwatersrand, Johannesburg. In 1936, he married Helen Bernstein, an emigrant from England. The couple had at least four children (three daughters and a son). Harry and Helen Fransman followed their three daughters and emigrated to the United Kingdom when he was 75 years old.

After his wife died in 2011, Fransman lived alone in his London apartment, but when two falls resulted in hip replacements, he had to move to a private residential home. In his final years, Fransman resided in the area of Elstree, Hertfordshire. Shortly after his 106th birthday, he became one of the oldest people to learn to play the violin and received weekly lessons after being inspired by his violin instructor who visited him on his 106th birthday in 2017.

Fransman became the oldest known living man in the UK (whose age is validated) following the death of Bob Weighton on 28 May 2020. However, Fauja Singh (born 1 April 1911?) claims to be several months older. Fransman died on 25 September 2020 at the age of 108 years, 305 days.

Fransman learning to play the violin at the age of 106 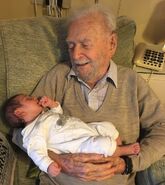 Fransman pictured with his great-granchild