John Haswell "Hasie" Young (23 September 1915 – 1 January 2021) was a British centenarian who was one of the oldest known survivors of COVID-19 in Scotland, having recovered from the disease at the age of 104. At the time of his death, he was also the fourth-oldest known man living in Scotland, after George Pollard, David Crawford, and David Thomson.

Young was born in Beith, North Ayrshire, Scotland, UK on 23 September 1915. His parents were both farmers. His father served in the Royal Flying Corps during World War I.

Young attended Glasgow Academy between 1930 and 1933. He was a Flight Lieutenant in the Royal Air Force during World War II serving in both England and India. He married Doris (now deceased) and had at least two children: Alison and Fiona. He was the manager of the Queen Street branch of the Bank of Scotland until retired.

In 2020, at the age of 104, Young contracted COVID-19 during the coronavirus pandemic. However, as of 3 July 2020, he successfully recovered, making him one of the oldest known survivors of COVID-19 in Scotland.

Young died in Bishopton, Renfrewshire, Scotland, UK on 1 January 2021 at the age of 105 years, 100 days. He was survived by two children Alison, and Fiona; four grandchildren Nicola, Heather, Michael, and Gillian; and nine great-grandchildren. 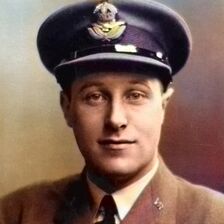 Young as a young man

Young being reunited with his daughter after almost 4 months apart - July 2020, after he survived COVID-19