Hazel Kathleen Plummer (née Downs; born 19 June 1908) is an American supercentenarian who is currently the oldest known person living in the U.S. state of Massachusetts. Her age is validated by the Gerontology Research Group (GRG).

Hazel Plummer was born in Somerville, Massachusetts, USA, on 19 June 1908 to Harry and Margaret (Allison) Downs. She had one older sister, Grace, and two older brothers, Elmer and George. In 1906, before Plummer was born, George died at the age of one. Plummer grew up a street apart from her future husband, Elmer – although they didn’t know it at the time. The two married in 1935 and had at least two children, Roger and David.

After the eighth grade, Plummer went to trade school to become a seamstress. She went to work for an upscale designer on Newbury Street in Boston, Massachusetts. After marrying, she raised her children while her husband worked at a steel company and then in the children’s department of a department store. The family moved to Littleton, Massachusetts in 1957, where Plummer has lived since.

After Plummer's father died suddenly at the age of 74, her mother lived with the family for 22 years until her mother's death at the age of 94. After her husband's death in January 2000, Plummer spent 17 years living in her own second-floor apartment before moving to a nursing home in Littleton, Massachusetts, when she was 109. At the time of her 110th birthday in June 2018, Plummer had six grandchildren and four great-grandchildren.

Plummer became the oldest known living person in the state of Massachusetts following the death of 112-year-old Dorothy Brown on 26 November 2019. In January 2020, her nursing home celebrated her achievement with a special party, and she also received a message from Massachusetts Governor Charlie Baker.

On 30 December 2020, at the age of 112, Plummer received her first dose of the Pfizer/BionTech vaccine, making her one of the oldest known people to receive the COVID-19 vaccine. She went on to celebrate her 113th birthday on 19 June 2021.

Plummer on her wedding day in 1935 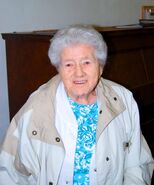 Plummer in an undated photo

Plummer in an undated photo

Plummer celebrating her 112th birthday in 2020, during the COVID-19 pandemic 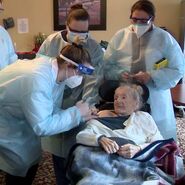 Plummer celebrating her 113th birthday in 2021