Hazel Pearl Young (née Davis; born 13 June 1910) is an American supercentenarian whose age is currently unvalidated by the Gerontology Research Group (GRG). She currently is the second-oldest known living person in Iowa, behind Bessie Hendricks.

Young was born in Walnut, Iowa, USA on 13 June 1910 and was one of 12 children. Her parents were Robert and Celesta (nee Engleman) Davis. She was married to Frank Young from 1929 until his death in 1973. She never had any children, but raised her husband’s nephews.

Young has lived in Des Moines, Iowa for the majority of her life, except for a brief period in Boston, Massachusetts, where she inspected airplane parts during World War II while her husband was in the Navy. She worked a number of jobs throughout her life, including at a hosiery mill, a soap factory, a magazine, two dime stores, and as a waitress.

Young currently lives in a nursing home in Altoona, near Des Moines, Iowa. For her 108th birthday in June 2018, she travelled to Spokane, Washington to visit her younger brother George Davis, whom she had not seen for eight years. Davis, who was Young's last surviving sibling, died in April 2019.

Young became a supercentenarian in June 2020. Her relatives were forced to celebrate her 110th birthday outside her home due to the COVID-19 pandemic. 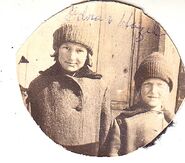 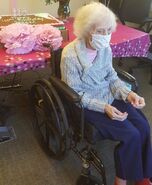 Young celebrating her 110th birthday in 2020