Hendrikje "Henny" van Andel-Schipper (29 June 1890 – 30 August 2005) was a validated Dutch supercentenarian. She was the oldest living person in Europe at the time of her death and remains the Dutch longevity recordholder. She broke the record of Catharina van Dam-Groeneveld (1887–2001) and extended it with roughly two years to the age of 115 years, 62 days.

Hendrikje van Andel-Schipper was born as Hendrikje Schipper in the small village of Kloosterveen (by now part of Assen, The Netherlands) on 29 June 1890 to parents Marines Schipper and Eberta Venekamp. Born several months too early, she had a fragile health during her youth. She only survied birth after her grandmother insisted on taking care of her. Also, it was advised that she would not attend school due to often being sick in her childhood. As a result, she was homeschooled by her parents, but would later end up in front of class as a teacher, when she started teaching.

In 1925, at the age of 35, Van Andel-Schipper moved to The Hague together with her parents, where she would meet her future husband Dick van Andel, who worked at the tax office of Amsterdam, ten years later. As he had been married before, Van Andel-Schipper's parents did not approve of the relationship, prompting her to break ties with them. Because of the low amount of food in multiple Dutch cities during World War II, Mrs. Van Andel-Schipper had no choice but to sell her jewelry to buy some food. She would be married to her husband for about twenty years, until his death from cancer in 1960; consequently, Hendrikje moved back to Hoogeveen, Drenthe. She remained in good health for about thirty years, before she battled and beat breast cancer in 1990 and moved to retirement home 'De Westerkim' in May 1996, at the age of almost 106.

Also known as "Aunt Hennie" or "Grandma Hennie", Van Andel-Schipper gained significant media coverage in her later years, as she was the oldest inhabitant of the Netherlands for a couple of years, met with members of the Dutch royal family at regular intervals, and was often asked for her secrets to longevity. On top of that, with Mrs. Van Andel-Schipper being a fond supporter of the football club Ajax, the club would recognise her support by having its members visit her for her 115th birthday.[1] Some two months later, Hendrikje van Andel-Schipper would died peacefully in her sleep. She was thought to be the world's oldest living person after the death of Ramona Trinidad Iglesias-Jordan on 29 May 2004 until her own death. However, that title was posthumously withdrawn on 9 December 2005, when Maria Capovilla of Ecuador, born 14 September 1889, was recognized as the world's oldest living person.

Well before she had lived to old age, she had agreed to donate her body to the University of Groningen at the age of 82 in 1972; the autopsy performed on her revealed that she had died of an advanced stomach cancer that had gone undetected. However, a later research revealed that it was probable that Mrs. Van Andel-Schipper would not have lived much longer, as she had only two blood stem cells left functioning; this led to the speculation that the human body is not able to live infinitely, as after a certain amount of time the body is not able anymore to produce new cells.[2]

Another revelation from the autopsy was that Mrs. Van Andel-Schipper's body seemed to age more slowly than the average one;[3] her brains showed no sign of dementia, and did not suffer from arteriosclerosis (one of the main causes of heart problems). On top of that, at the age of 113 Mrs. Van Andel-Schipper scored the average result of a 60- or 70-year-old in a memory test. All of this seemed to suggest that mutations in her body caused her to age less fast than other people.

Following Mrs. Van Andel-Schipper's example, Egbertje Leutscher-de Vries (another Dutch supercentenarian) also left her body to science; results of her autopsy further supported the hypothesis that genetic mutations (thus, a genetic cause) are at least partly the reason why supercentenarians grow older than other people.[4]

The phrase "I was born too early and will die too late" was reportedly one of Mrs. Van Andel-Schipper's catch phrases in her later years.

When asked about the secret to her longevity, she answered: "I breathe and that's it."

Because she had an older sister, Dina, Mrs. Van Andel-Schipper wasn't her mother's favorite child. In a 2002 interview, she stated: My mother was very strict, especially towards me. Not towards my handsome sister, but she found me ugly. I never had a relation with my mother. I did had a very good relation with my father, though. My father never slapped me, my mother did. Sometimes, I couldn't sit down for a day because of the pain.[7] 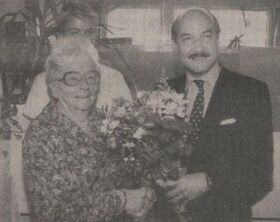 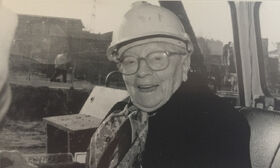 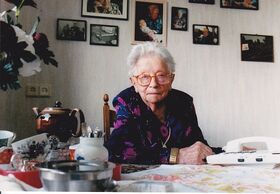 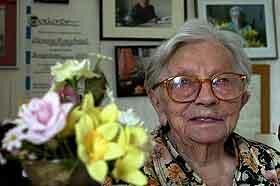 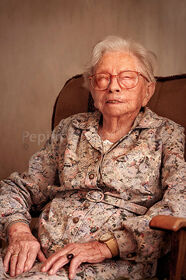 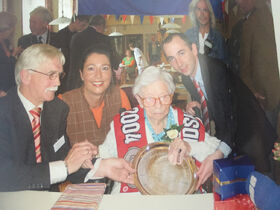 Hendrikje on her 114th birthday. 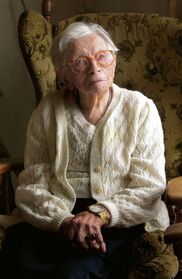 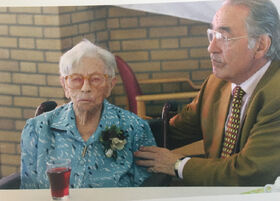 Hendrikje on her 115th birthday. 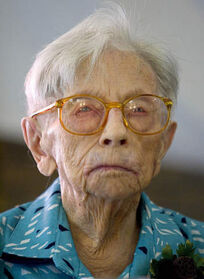 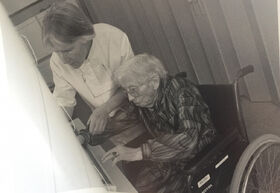 Hendrikje voting for the 2005 European referendum.