Henrietta Dobin was born in Newark, New Jersey, United States on 17 August 1911 to Samuel and Eva Dobin, Jewish immigrants from Russian-annexed Poland. She had one older brother, Jacob. Her family moved to Brooklyn when she was 5. Throughout her life, Dobin said, she’s had many adventures. She hitchhiked to Texas to visit her boyfriend Solomon when he was in school, visited Russia once it was re-opened to American tourists and went to Israel after it reclaimed the Western Wall in 1967.

Dobin has traveled to almost every continent. She married Solomon Dobin on 9 March 1930. He died in November 1990. They were married for 60 years and lived in Far Rockaway, Queens, until their children, Myra and Steven, were married. They then moved to East Rockaway, where Dobin lived for 35 years. Her daughter, Myra Markowitz, was born in 1937 and her son, Steven, was born in 1946.

Dobin currently lives in North Woodmere, New York. She works at a museum for 2 days a week. She lives in the Bristal Care Center for Seniors. 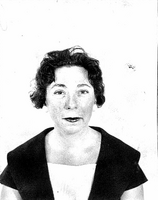 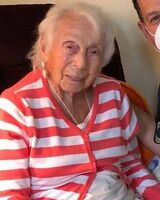