Henrietta "Ettie" Irwin (née Picton; 27 May 1906 – 15 January 2019) was a validated British-Canadian supercentenarian who was the second-oldest known living person in Canada, behind Dolly Gibb.

Henrietta Irwin was born as Henrietta Picton in Belfast, Northern Ireland, UK on 27 May 1906, the eldest of four children. She survived typhoid fever when she was 11 years old. Her father died when she was in her early 20s.

In 1923, she met Norman Lindsay Irwin in Belfast, who was training to be architect. He got called away to Toronto, Canada, and from 1929, he started writing letters to Henrietta. Her father died shortly before she was due to leave for Canada to be with Norman, so she had to stay and help her mother look after two younger brothers.

Norman and Henrietta finally married in 1939 at the Timothy Eaton Memorial Church. The couple had two children, Peter and Deirdre. Henrietta said that they rarely argued, and that most of their disputes happened before their marriage. She taught piano lessons for many years on a Steinway Grand Piano, which she still has today. The couple also took their children on several vacations to places such as Mexico, Spain, Italy, Switzerland, Venice, and Germany.

Norman Irwin moved into a nursing home around 1995. Henrietta visited him every day. When she arrived home from a visit one day in 2002, she received a phone call to say that he had died, just moments after she left. He was 98 years old. The couple had been married for around 63 years.

Irwin was active throughout her life, playing sports such as tennis, golf and curling. She has also said that dogs were a huge part of her life and there was never a time that she didn’t have one. She had a cat.

Irwin said she has no idea how she’s lived as long as she has, but said she has a very strong faith in God. That faith began with her own mother when her father who was a seagoing engineer spent his days at sea and they never knew for sure he’d come back alive. Together they would pray for his safe return and he always came back. 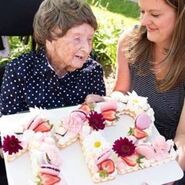